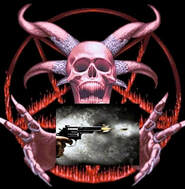 The Psychic Warfare Cell is placed in a special coffin container. You cannot wear this amulet as it contains huge amounts of deadly energies. It is used more as a projection tool than a traditional amulet you carry. The amulet stays in the coffin box with other special items.These items include a crystal skull and special graveyard dirt from a mass murderer's grave.